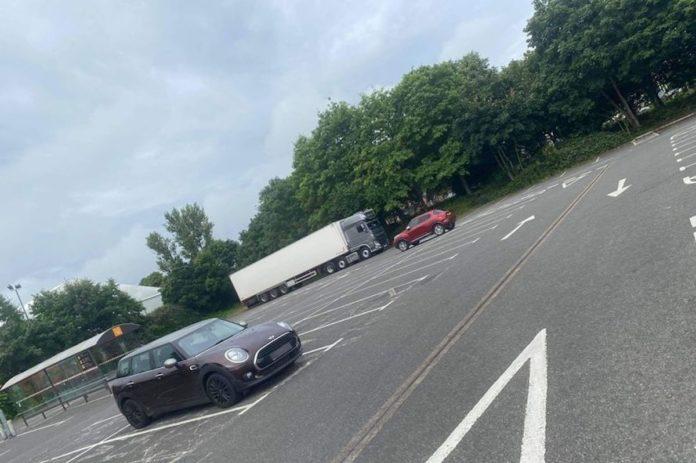 A trucking company owner has the support of the general public after firing back at a disgruntled citizen apparently enraged by a trucker taking up ‘too many spaces’ in a nearly empty parking lot.

Peter White of Whites Transport Services Ltd in Coventry, England says he received an aggressive message on Facebook earlier this month from a man named Chris. The angry message explains that the truck driver took up multiple parking spaces with his rig as he went inside of the grocery store to shop for about 15 minutes.

“He was parked there for 15 minutes and then came out with a trolley [cart] full of shopping so it isn’t as if he just stopped for the toilet,” the message reads.

“Surely these things should be done in a car on the driver’s own time. I hope you will deal with this swiftly and avoid it happening again,” Chris concludes.

“How dare he eat,” White joked in a Facebook post defending his driver. White also pointed out that the driver was just starting his two week stint OTR and needed to stock up.

“In the picture there’s only two cars parked so it’s pretty much empty. The driver could have parked right outside the doors, but he parked far away just to keep his truck away from the building. I’ve had messages to say the car park is enormous and it’s never, ever full, even on the busiest of days. He’s just a busybody that likes to complain and create a problem when there isn’t a problem,” White continued to Nottinghamshire Live.

Way to stand up for your driver, bossman! Now if only the grumpy motorists would get the message.

Categories
Read More
Trucking News
Cops make ‘$1 MILLION’ recovery after truck hauling laptops was stolen while driver showered
Texas police say that they were able to recover more than $1 million worth of stolen goods after...
By MEGA MISTAKES 2021-05-03 21:49:00 0 497
Trucking News
Truck driver in custody after 80-100 people bail out of trailer at San Antonio truck stop
Homeland Security Investigations (HSI) is investigating a suspected large scale human...
By MEGA MISTAKES 2021-05-07 20:33:25 0 497
Trucking News
Trooper, trucker work together to save man trapped atop burning bucket truck
A truck driver and a police officer worked together to save a man trapped 35 feet in the air as...
By MEGA MISTAKES 2021-04-17 16:58:36 0 1545
Trucking News
Georgia issues 87 citations in distracted driving blitz targeting container haulers
The Georgia Department of Public Safety (DPS) recently conducted a distracted driving detail...
By Truck Drivers Life 2020-12-27 22:11:36 0 2154
Trucking News
These violations might be hurting your trucking insurance rates
Truck driver insurance provides essential protection for you, your job, and your truck, but there...
By Truck Drivers Life 2020-12-12 11:31:58 0 788