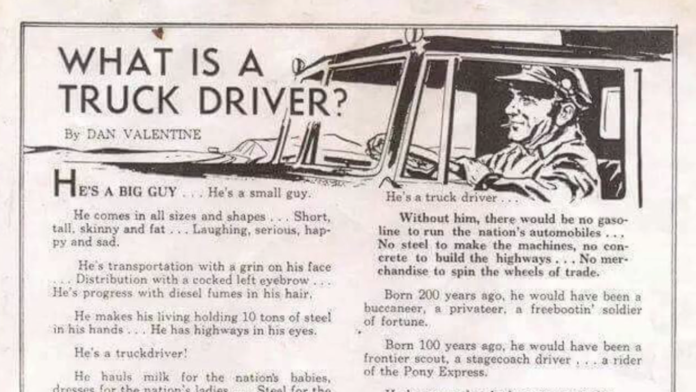 A decades-old flier written in honor of the American truck driver is a stirring reminder of the old school trucking mentality.

The prose poem “What is a truck driver” by Dan Valentine appeared in 1960 and pays tribute to the truck drivers who kept America moving. 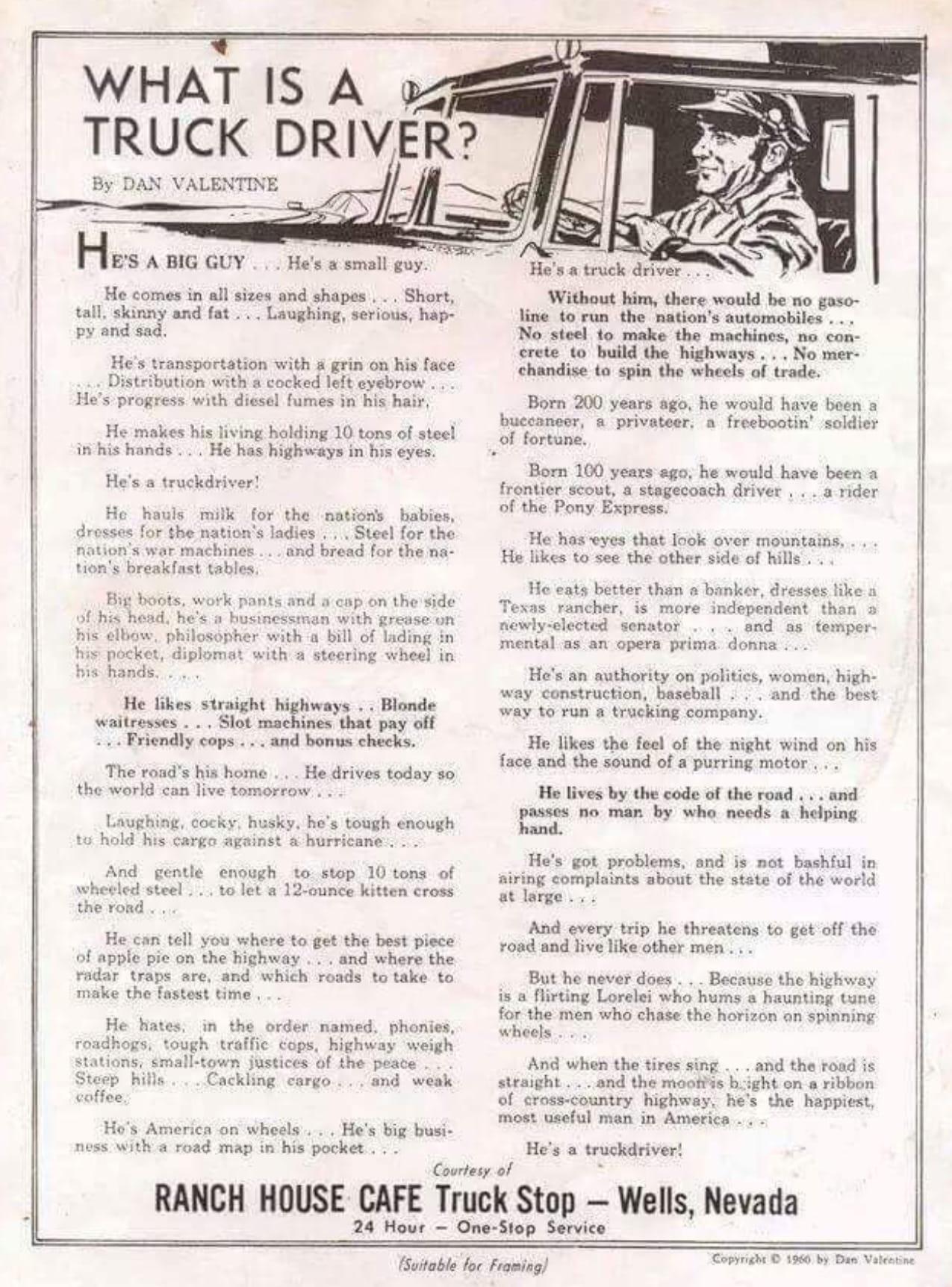 See below for the full text:

“What is a truck driver?” — Jim Valentine.

He’s transportation with a grin on his face…Distribution with a cocked left eyebrow…He’s progress with diesel fumes in his hair.

He makes his living holding 10 tons of steel in his hands…He has highways in his eyes.

Big boots, work pants, and a cap on the side of his head, he’s a businessman with grease on his elbow, philosopher with a bill of lading in his pocket, diplomat with a steering wheel in his hands…

Laughing, cocky, husky, he’s tough enough to hold his cargo against a hurricane.

He can tell you where to get the best piece of apple pie on the highway…and where the radar traps are, and which roads to take to make the fastest time…

He’s America on wheels…He’s big business with a roadmap in his pocket.

Without him, there would be no gasoline to run the nation’s automobiles…No steel to make the machines, no concrete to build the highways…No merchandise to spin the wheels of trade.

Born 200 years ago, he would have been a buccaneer, a privateer, a freebootin’ soldier of fortune.

Born 100 years ago, he would have been a frontier scout, a stage coach driver… a rider of the Pony Express.

He has eyes that look over the mountains … he likes to see the other side of hills.

He eats better than a banker, dresses like a Texas rancher, is more independent than a newly-elected senator…and as temperamental as an opera prima donna…

He lives by the code of the road…and passes no man by who needs a helping hand.

He’s got problems, and is not bashful in aiming complaints about the state of the world at large…

And every trip he threatens to get off the road and live like other men….

And when the tires sing…and the road is straight…and the moon is bright on a ribbon of cross-country highway, he’s the happiest, most useful man in America…

1
Please log in to like, share and comment!
Sponsored
Categories
Read More
Trucking News
Neighbors surprised to find two chocolate labs manning rig that crashed through house
Neighbors were surprised to find two chocolate labs inside the cab of a semi truck that plowed...
By MEGA MISTAKES 2021-07-26 23:58:12 0 678
Trucking News
Semi careens toward hotel in crash caused by car driver backing up after missing exit, firefighters say
Firefighter in Indiana say that a semi truck driver crashed onto hotel property after striking a...
By MEGA MISTAKES 2021-07-25 14:45:43 0 433
Other
Thousands expected at wake for NYPD officer killed in the line of duty
GREENLAWN, Long Island - Hundreds are expected at a wake Monday for NYPD Officer Anastasios...
By Truck Drivers Life 2021-05-03 17:40:41 0 133
Trucking News
3-on-1 truck stop assault sends driver to emergency room
A truck driver was injured at a truck stop on Sunday morning after being assaulted in the parking...
By MEGA MISTAKES 2021-05-03 21:15:43 0 518
Trucking News
Woman waiting in the parking lot for a truck driver has a heart-melting surprise
A social media influencer is going viral for her wholesome and inspiring truck driver...
By Truck Drivers Life 2020-12-04 21:37:17 2 3932